The event took place on a warm dry day and the £200 prize and Trophy was won by a Team from Paignton Bowls Club, one of who couldn't stay for the photo. 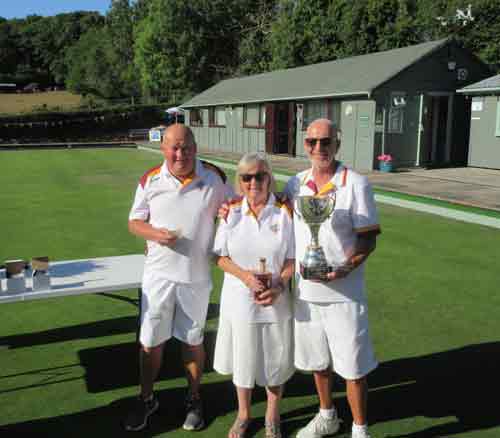 the Runners up were from Paignton Torbay (£120) 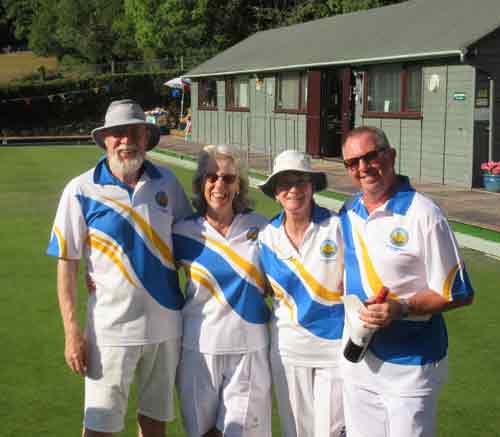 and a team from Kings BC, one of who couldn't stay for the photo, claimed third place (£72). 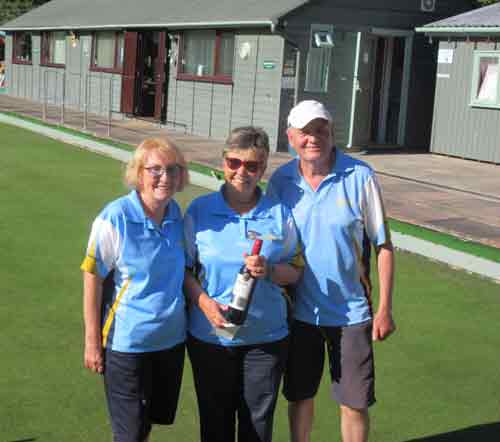 On July 24th, Marldon sent a rink to represent Section 6 in a four rink game against Section 5 in the Coronation Cup. Bob Tame, Barry Hodges, Allan Coombe and Ed Sosnowski were the Marldon team who travelled to Bitton Park for the game. Although we won 18-14, the other Section six rinks were unable to win and the Section 5 rink that won 50-4 made sure of a Section 5 victory. The Marldon team were pleased to win against good players in a combined Newton Abbot - Bitton park team. 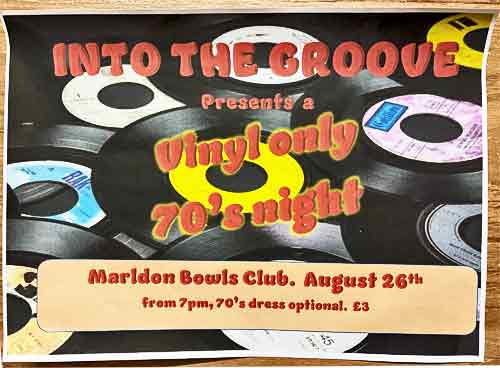 On On Friday August 26th from 7pm, we are planning a 70's Vinyl Night, see Events page for more details.

We are saddened to hear of the death of Life Member, Pat Grice. Pat was a true lady who was a founder member and the first secretary of MBC. Without Pat and a few others of her generation, MBC would not exist. She was the life and soul of the club in the early days, supported everything and ran numerous jumble sales to raise funds for the green which we did not have at the time. A debt of gratitude is owed to her. May she never be forgotten.

The committee have decided that the duties formerly known as "Green Duties" should now be known as "Cleaning duties", as that title more accurately reflects the tasks involved. Notices have been put up around the clubhouse giving guidelines as to what should be included in the Cleaning Duty and the club rules have been amended to reflect this change. It is important that members check the rota in the Captain's office so they know when it is their turn.

Persons on Cleaning Duties no longer have to put out the kit for games, that is now the responsibility of the players involved in the game.

Maintenance sessions continue on Tuesday mornings. The green will not be open for Roll ups on Tuesday am, if you are free that morning, why not volunteer for one of the maintenance jobs.

We now also need a team of volunteers to assist Paul in keeping the grass cut regularly. If you can spare a morning a week, or if we get enough volunteers, one morning a fortnight, to cut the grass on the bowling green to assist Paul, please ring him to let him know when you can come.
Many Thanks,
Management Committee.

We will, at some time in the not too distant future, need a new greenkeeper, so if you have any interest in commencing the training required to be our greenkeeper, please let Paul know.

Paul has issued an appeal for more volunteers to attend to lighten the workload of the current Tuesday Maintenance session attendees. So please go down and see what you can do to help. Allan and Paul would be very grateful!

Volunteers continue to sweep the green daily as this should be done every morning, if weather permits, throughout the year. More volunteers are always welcome, Contact Paul to Volunteer.

Paignton Club has been provisionally booked for the Christmas Dinner and Dance on 10th December 2022. Tickets will go on sale when Paignton Club confirms the price, in the meantime, please put your name on the list in the changing room window, and pay a deposit, which will be returned if you do not like the final price set for this event. Numbers are limited by the size of the venue.

We have two new Sponsors this season, they are Churston Exterior Cleaning and G & C Home improvements. We also received ongoing sponsorship from Marldon Service Station (Cox's garage) and Paignton Flat roofing. Please support our sponsors when you can.
We would be pleased to hear from any other companies that may want to sponsor us for 2022 season. Further details on the Sponsorship page.

The incoming President, Colin Cradock, announced that his Charity for 2021-22 will be the National Coastwatch Institution. and that the club would also get half of any monies raised. He has (when last asked) raised £800 so far, so thats £400 each for club and charity.

Congratulations and commiserations to Graham Walton, Lee James, Martin Rolfe and Peter Cartwright. They reached the Section 6B final of the County 4's competition but then drew, as opponents in the final, the England Internationals, Louis Ridout, Jamie Walker and Sam Tolchard with A O'Neill, on their own green at Kings, where they proved to be too strong for the Marldon four. Although Marldon lost, the players enjoyed the challenge of playing these very experienced top level players.

Congratulations also to Graham Walton and Lee James on reaching the Semi Final of Devon Section 6B Pairs competition. In the Semi Final, on Monday 6th June, they played last year's Devon Champions and National Finals runners up, Sam Tolchard and Louis Ridout at Marldon. A good crowd of supporters came along to watch the game. Graham and Lee put up a good show, taking the lead early on in the game, before the England international pair caught up and built up a small lead which they held to the end. Final Score Lee/Graham 11 - Louis/Sam 17.

Graham with Peter Dunkley are also reached the county semi-final of the National Family Pairs event before losing to a Pair from Shaldon.

Shaun O'Leary has a set of Drakes Pride Professional Woods Size 1 Heavy) in good condition (2018 Stamp) for sale. (£70 or best offer) Contact Shaun if you are interested.

Pat Denbow would like to buy a reasonably priced set of Size 00 woods, if anyone knows of any please contact Pat. 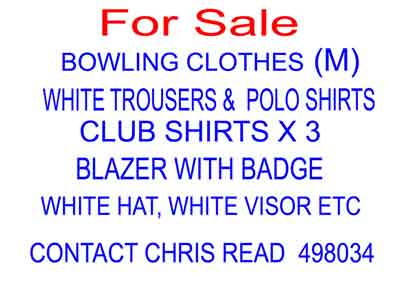 The Shortmat Bowls Sessions in the Village hall will hopefully recommence in October 2022. Further details available from Pam Neale. The Winter Indoor Bowls at the Derwent final league tables can be found via the RESULTS page on this site.