The Torbay Shortmat League is played on Monday evenings at various venues in Torbay.

Marldon Bowls Club have a team called 'The Magpies' entered in the League with matches played as three sets of Triples using 9 players each playing a 12 end triples game.

We use our own clubhouse as a venue for league games as you can see in the photos.

The Competition runs throughout the Winter months and incorporates both league and cup games.

The Club also plays socially in Marldon Village Hall each Wednesday from 2pm to 4pm in the Winter months open to everyone.. Many Members have been enthusiastically enjoying these sessions for many years as the two photos below show. They were taken in 2014.

Plenty of Marldon bowlers enjoy this regular meeting on a Wednesday afternon in the winter to pit their bowling wits against each other. 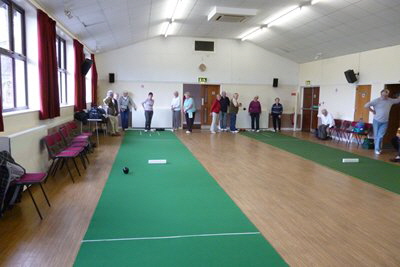 The view down the hall showing the two mats. Photos provided by John Gibbons